On 3rd September 1939, Britain joined World War 2. Britain and France declared war on Nazi Germany in response to the invasion of Poland. Britain sent a British Expeditionary Force (BEF) to aid in the defence of France. The BEF were fought back by the Germans to the beaches of Dunkirk.

During 1940 Winston Churchill became prime minister. September the Royal Air Force defeated the German Luftwaffe, during the Battle of Britain.

Allied Merchant ships carrying supplies were attacked by German U-boats. The Battle of the Atlantic lasted the whole length of the war. It was a series of Naval conflicts between the Royal Navy and the German Kriegsmarine.

The North African campaign began on 10th June 1940 until 13th May 1943. The British General Montgomery led the campaign, against the German General Rommel. The battles would be in the deserts of Libya, Egypt, Morocco, and Algeria.

Bomber Command had played a central role with bombers flown by the RAF and United States Army Air Force (USAAF). They carried out devastating air raids day and night on Germany and occupied Europe.

The British declared war with the Empire of Japan on 8th December 1941. The Japanese attacked the British colonies of Malaya, Singapore, and Hong Kong.

A British led Burma Campaign started on 14th December 1941. The British used forces from British India against the Imperial Japanese army. The campaign came to an end on 13th September 1945.

United States, Britain, and Canada began to develop an Atomic Bomb. The secret programme was named The Manhattan Project.

The Italian campaign consisted of Allied and Axis operation in and around Italy. Began with the invasion of Sicily during July, before moving to the mainland. The campaign came to an end when the German-Italian forces surrendered in 1945.

On 6th June 1944, a large, Allied invasion of Normandy against the Germans. The largest seaborne invasion in history happened along the northern French coastline. An Allied airborne invasion also happened behind enemy lines. The invasion was codenamed Operation Overlord, also known as D-Day.

The Allies fought the Germans back into Germany, however the Russian army reached Berlin before the Allied Army. Hitler committed suicide by gunshot, resulting in Germany surrendering. The war in Europe had come to an end.

The British Royal Navy Pacific Fleet took part in the Battle of Okinawa on 26th March 1945. The British fleet successfully neutralised Japanese airfields in the Sakishima Islands. Airfields on northern Formosa also became neutralised in April. During May, the aircraft carrier HMS Formidable came under attack by the Japanese Kamikaze.

2nd September 1945, the Atomic bombing of Hiroshima and Nagasaki in Japan. The Japanese surrendered, resulting in World War 2 coming to an end. 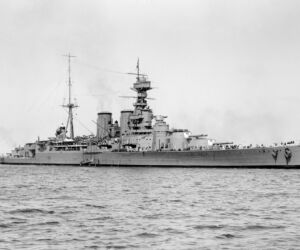 Battle of the Denmark Strait

HMS Hood, the pride of the Royal Navy sunk by the mighty German Bismarck at the Battle of the Denmark Strait on 24th May 1941. 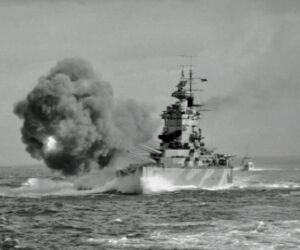 Battle of the Atlantic

Battle of Atlantic a continuous military campaign lasting the whole period of World War II (1939-1945) between Allied and Axis forces. 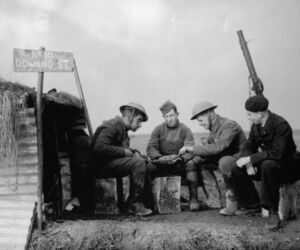 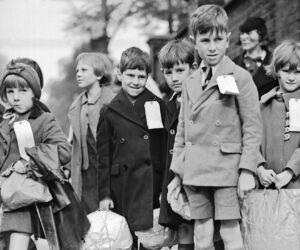 Evacuation during the Blitz

The evacuation of children from British towns and cities gave temporarily protection from the Blitz during the Second World War. 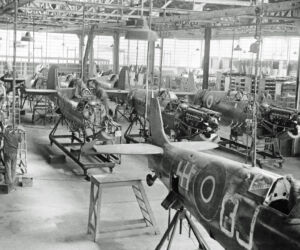 Britains Economy during the war relied on the British Empire and Commonwealth, then financial and other aid from the United States in 1940-41